As catalysts for change and collaborative action, we - the German Impact Hubs alongside all Impact Hubs worldwide - have been following our mission to break with the ‘business as usual’ and inspire collaborative innovation to work for a sustainable future.

Now, more than ever, we need to build back better

This year brought us a global pandemic that has prominently showcased the deficiencies of an economic system that’s built upon destructive investment patterns and unequal, unsustainable structures. If the Covid-19 crisis has one positive facet, it might be the wide-spread realization that we can no longer avoid taking real action. The crisis has been, and is, a wake-up call, demonstrating the ultimate power of nature and calling upon this planet’s decision makers to align the recovery measures with the protection of our society and environment. As it’s broadly put: to build back better.

Born out of crisis: The first nationwide Climathon in history

Far from denying the dramatic effects and damages the crisis has, we therefore strongly believe that it’s also a chance for real change. Now, more than ever, it should be clear that we need to join our forces if we want to create a future that works for all. Thus, facing the challenges everyone has been facing this year, all German Impact Hubs decided to participate in the annual global Climathon not as singular Hubs, but to rather organise a Climathon Germany - the first nationwide Climathon ever and the first joint event of Germany’s 7 Impact Hubs (München, Berlin, Leipzig, Dresden, Hamburg, Stuttgart, Ruhr). Organising this Climathon has been a ride, to be frank - but it has once again shown us that, addressing the challenges of climate change, collective action is not only urgently needed but also accelerates the potential effects and outcomes.

One of these effects can be seen by the number of participants alone: 500+ changemakers took part in the 24-hour hackathon in Germany, making almost 10 % of global participants (4500). Together, these people have created 44 teams that developed 44 concrete solutions to local challenges, which were proposed by our 23 partners. Already in March, the #WirVsVirus hackathon - with more than 43.000 participants - had shown that a purely digital event doesn’t diminish the participants’ commitment nor its outcomes. Similarly, we were blown away by the motivation and spirit of the participants and also our pro bono experts and coaches that guided the mixed teams through their ideation sprints. Students and professionals, architects and physicists, climate experts and motivated citizens, young and not so young people from all over Germany joined their creativity and innovative ideas to combat a pressing problem that concerns each and everyone of them: climate change. We are proud to say that the event was a full success, and it was a tough one to nominate only 14 of the 44 teams as winners of their challenge. After seeing 14 great final pitches at the Grand Finale two weeks after the actual Climathon, it was equally hard for the jury to pick 3 final winners. 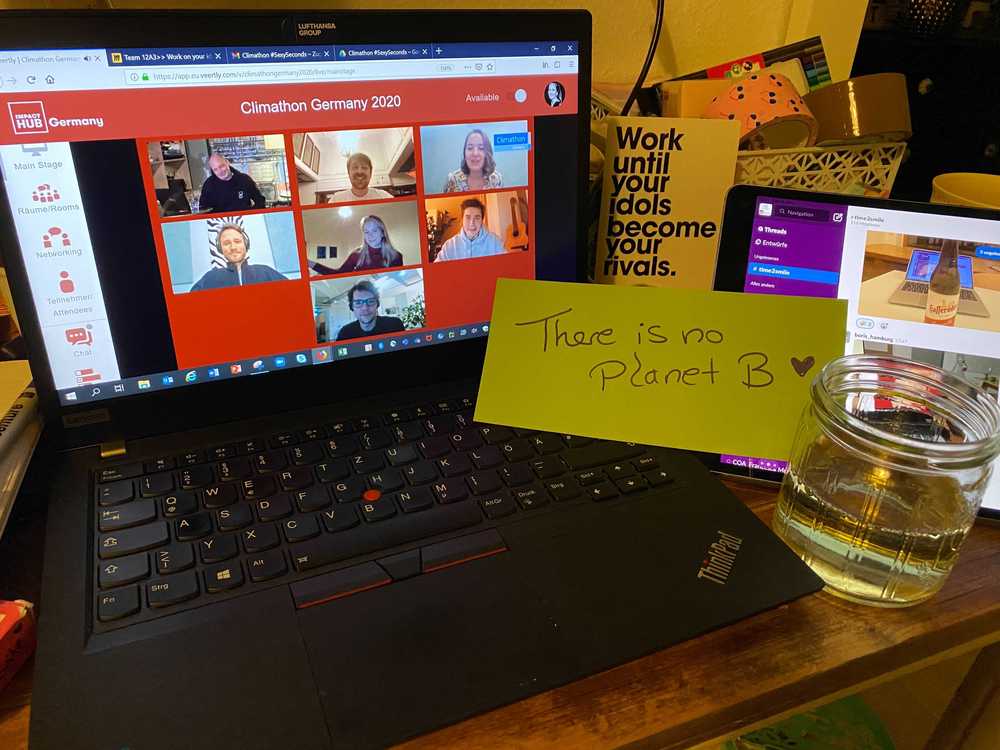 In the end, however, the votes showed a clear winner: the team “Stuttgarter Klimahelden“ (engl. Stuttgart Climate Heroes) presented their idea of a climate tracking tool to encourage Stuttgart’s citizens to track and compensate their personal energy usage and emissions with the concept of a citywide challenge and prizes that benefit the different districts. The second place went to “#SexySeconds“, a concept for a pop-up thrift store (in collaboration with Tchibo) that wants to raise awareness for and shake up the often dusty image of second-hand fashion. Last but not least, the team from “Go Heidi“ came in third, presenting a personalized Virtual Assistant AI that is aimed at fostering a mindset of user responsibility while improving the overall customer experience with car-sharing, such as ShareNow. Apart from winning an Impact Hub Online Membership and mentorship, for all three teams, Climathon Germany has marked only the beginning of bringing their ideas further towards viable solutions that can actually contribute positively to the communities and environments in our cities. 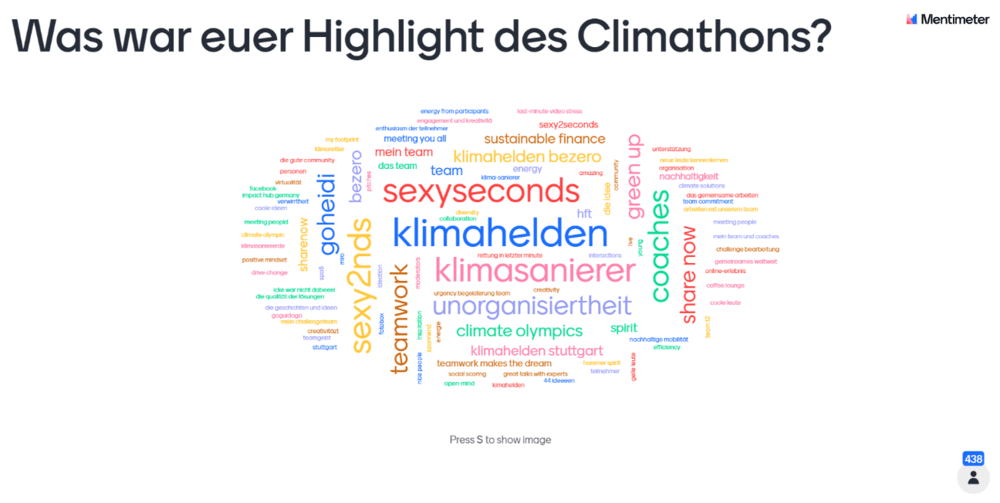 Take a look at all the solutions developed during the Climathon Germany: They’re listed here. You want to join a community of 18.000+ changemakers and become a member of the Impact Hub Network? Find your local Hub here.